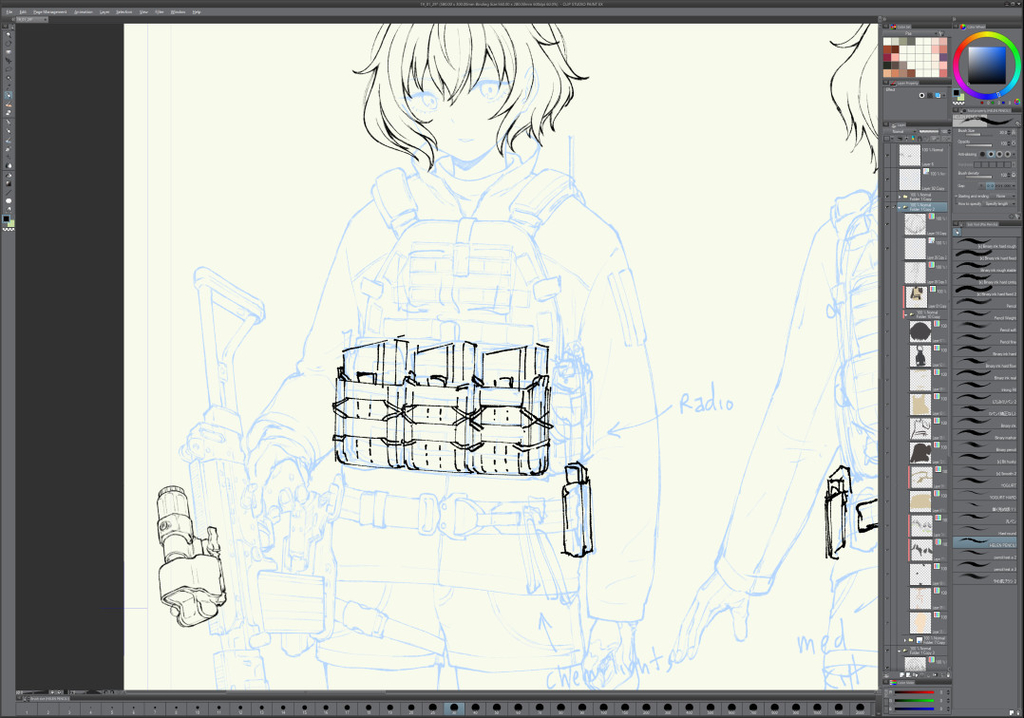 @Penguin Cafe Parade is still my favorite song featuring Saki, but I also liked Favorite ni Odorasete. To be honest I really like Asselin's voice the most from that group lol.

I haven't heard of Band Yarouze but from a brief glance it seems like the game is shutting down?

As for character designs, that's a pretty complex question to me. I mean, the character sheet I'm working on right now for example, I mostly did it just as practice to learn more about military tactical equipment, so most of my time has actually been spent researching specific components and how everything comes together. The character themselves are more of an afterthought, but I hope that the next character I work on I can do so without having to stop and spend so much time looking up model numbers and the like.

For this one character sheet more of my time has actually been spent researching specific details to make sure I understand things properly, so that I'm not just drawing random/incorrect equipment. I'd also say that's the more taxing aspect of it, similar to how when one begins learning art they must study how form/colours/light etc work together. It's always worth it though, as once you've done enough studies you'll have developed a fairly solid foundation of knowledge from which to draw from when you want to just scribble from your mind.

I think with a lot of things, it's really obvious if the designer doesn't actually understand the function of certain things. Not only is it noticable to anybody who's even vaguely familiar with the subject (be that guns, fashion or any particular niche etc) but it's also crippling to the designer, as they are working more or less on pure instinct, rather than actual knowledge. I'm not saying the two are mutually exclusive, but instinct honed from proper knowledge means much more than just going on your gut when you don't understand the topic well enough.

I get the feeling I'm not really explaining this well because it's late, but I do feel the most difficult aspect of designing a character is truly understanding the intent and purpose of said character. It doesn't help that you can entirely overthink this, and many of the best/most memorable designs are strikingly simple in nature. Understanding that balance of how far to take the design is crucial. Simple is good, but a lot of times the difference between simple and plain is razor thin.

As for the best/most fun part? For me it's actually the part that comes after the designing. Seeing the design come to life (be that in a video game or story) has been the most satisfying aspect to me. Don't get me wrong, designing a character itself is fun too, but seeing it put into something is the greater reward to me.

But, if the question was more specifically what part of the process of designing a character is the most fun, I'd have to say it's the initial stage where you create a rough concept, because the idea hasn't truly taken form yet, so you get to explore a lot of options and that's quite an enjoyable thing to do.

Anyway, I'm sort of rambling here. It's an interesting topic and one that I feel deserves a better write-up than what I've done here so maybe I'll try explain my perspective a bit more in-depth in future.